Trial By Light and Humidity

As I sit here staring out my frosty window at this beautiful blanket of snow, a little jolt of cabin fever and regret is setting in. Unfortunately, I just placed all my summer test plants into the greenhouse a couple of days ago, and the greenhouse did not survive the storm. The peppers, tomatoes and all the test plants I started during the summer bit the dust. I had to get them out of my growing room to make space for our Balkhi seed run, but I think losing the Oaxaca and Mazar plants is my biggest regret of this loss.

I do have two clones that survived from two of the three Oaxaca I started, but the rest are gone. Although I took cuttings from everything, most of them died. They appear to dislike rooting plugs, so I will have to work on finding the best cloning method for these. Most likely it will be an updated bubbler system that I will show you later when I build it.

Considering that this is the end of October and we are at an elevation close to 2 kilometers high, we did well to get this far into the season. I will be ready for next season, with all new insulated panels and walls. I bought a decent heater but it wasn’t enough with the 6 mm plastic wrap.

I moved the Balkhi seedlings into their new, temporary home and I have broken out some of the new LED’s to watch over them. To keep them company I have the winter clones of my CBD girls, The Wife, Juliet, Spectrum 12, and Blue Blood. This is to keep them preserved over the winter. I don’t know how much longer I will keep these strains, but I do need to preserve them in feminized seed before I pass them on. I never kill anything (on purpose), I always find my extra plants a home in need. Just because I have a low tolerance for hybrid side effects, doesn’t mean others do. Although, almost everyone I have spoken to lately, tells me that they experience some level of paranoia from their hybrid stash too. These girls kill pain as well as opiates without all that pesky addiction and death stuff, so saving them is a practical move.

When I posted the last article, only 23 of the 24 Balkhi seeds were showing. Number 24 was breaking soil but one of the older sprouts was looking wilted. I don’t know what would cause this. I massaged the pod to loosen and adjust the coco coir to insure the root was getting proper contact. These coco pellets are made with coarse material so until rooting spreads these sprouts are loose in the pods. I lowered the light intensity to allow some healing time.

I have taken every precaution to keep the environment sterile to prevent mold and other such problems. It is too bad these sprouts will have decided their fate before this article posts, I could have read your comments, you never know what trick someone might come up with. As the plants get bigger I will be granted more time to solve problems. It was my hope to get at least 20 plants to the finish line, but only 16 have made it through.

The last few days have been a learning experience. The climate here is typically very dry. However, this year has been abnormally humid, considering we are in a drought. We have already topped last year’s snow total and it’s not even winter yet. This last snow really drove up the humidity and I think it was hard on these typically arid-region Afghani plants. A few took ill and our number has decreased by eight in total. Two of them just stopped growing, as you can see in the photo. I removed their protective humidity dome to let them get some open air. They were getting too much moisture and fortunately I caught it early so the losses were small. The remaining troopers have really taken off in the last couple of days.

I also had to turn down the LED’s intensity until I had time to raise their height to about 18 inches (45cm). This new tech is very intense and it needs plenty of spacing from younger plants. I had some minor leaf burn but caught it quickly, so they are doing much better now. However, I think that the Quantum LED’s are a lot hotter than the older Burple LED’s. I saw that burn was a problem with some of the grow videos I watched on Youtube during my research. This is why I did not buy the larger 4-panel lights; I wanted to space them out. With the lights adjusted and the humidity under control, I think we will see few if any problems from the remaining seedlings.

The problem with unfamiliar, new technology, is that you need to err on the side of caution. I misjudged two conditions and the garden suffered losses. I think that at least three of the losses were preventable if I had recognized the humidity problem sooner. Plus, there would not have been any burn if I had set the light about 20cm higher to start. The lights are now set at about 45cm above the plants and they are doing very well.

Since this phase is 50% about getting new seed stock for storage and future projects, I don’t want these plants to get very big. As soon as these get enough size to take cuttings, I will give them a week to recover from being cut and then flip the timer to flower.

Currently, I am feeding once a day, doing a small pour. The idea is to create an air draw through the coco like hydroponics do. I am certain the growth rate would increase if I set the pots under drip emitters on a timer. My nutrient is currently a water soluble organic ‘Grow’ called Rainbow Mix Pro, made by Earth Juice. I’m mixing it for light daily feeding with R/O water premixed to 200ppm with Cal/Mag. I always pretreat my R/O water with Cal/Mag to bring it up to 200ppm. When I repot, I will switch out the nutrients to a hydro-friendly organic nutrient made by Nectar of The Gods. 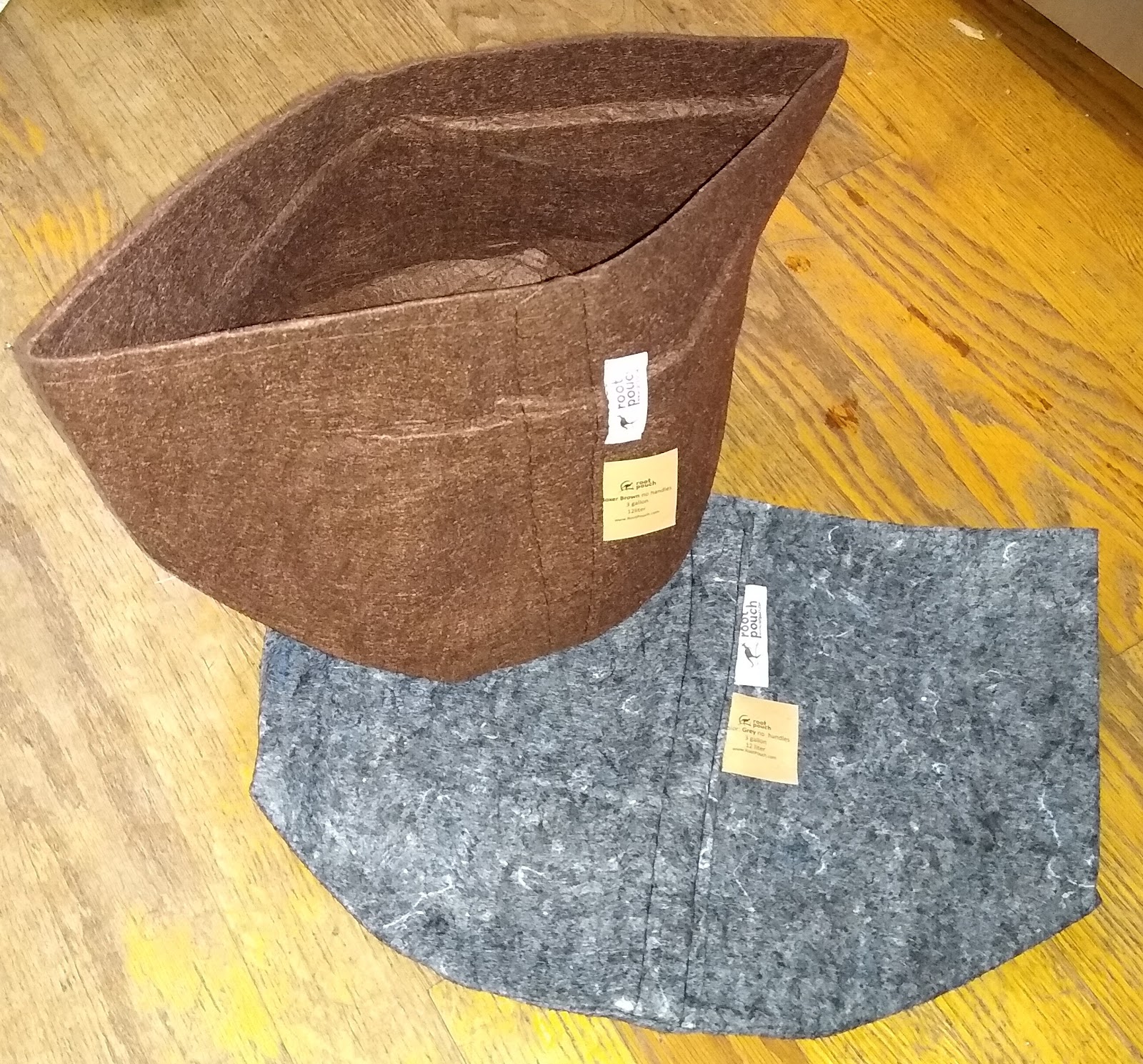 I do not plan on going above 2- or 3-gallon pots, which with luck, will give plenty of root space for a shorter growing period. Hopefully, we will keep this crop under 100cm when finished, or 60cm would be even better. If these stay small I can complete the run in the current space and avoid the problems of keeping everything from freezing in the garage. The problem will come from these plants getting too big for the available space.

It is also possible that the sativa phenotype will require more time in flower than the other phenos. The sativa is likely to be taller and experience more stretch. I can easily use the garage during the warmer season but winter here can be too brutal without environmental controls. This cold limitation is difficult to overcome, so I will work on insulation and a heat source for the next cold season. Playing it safe will limit my size but I won’t have to worry about freezing.

I am running two different brands of LED lights right now. I really like the cooling fin heat sinks and controllers that are included with the Viparspectra lights, but these are last year’s models. I got them greatly discounted since the newer models have been released. I did buy two of the newer ones but I chose the older ones to use in the vegetative stage. They have a higher level of blue spectrum than the newer models. Evidently too much blue hinders flowering. So they reduced the blue in the newer models.

I placed two of Spider Farmer’s LED’s over the wintering clones mentioned earlier. These are one of the more expensive lights but they do offer one of the best PAR maps. As for the results, that is yet to be seen. Sometime, down the road, I will run a side-by-side to see what proves out to be the best. I seriously doubt that there will be a lot of difference.

I also found some of the new Quantum tech LED’s in the red spectrums and will add these to the light grid. I won’t turn them on until flowering but we should expect them to truly boost the resin production and possibly reach a level close to sun-grown hash plants produced at high elevation. In the spring I will open a larger greenhouse and we will see just how hashy we can get at 7000 feet elevation inside a greenhouse.

This first run might be a good indicator that I need to increase the number of seeds I have on hand to include spares. This will greatly affect my count and ability to run more than one strain at a time until the new year and my license renewal. I will need to increase my count so I can run two strains. Because these are dual-purpose runs, seeds for preservation, and a search for CBD strains, the numbers need to be larger to maintain diversity in the crop and also increase the likelihood of locating CBD rich phenotypes. As you can see from my experience, some are just going to die for no apparent reason, so I need to be prepared to cover these losses. I can only hope that we don’t have a disaster that eliminates an entire tray at some point. That would be a real bummer.

Well, the deadline is here again, so I need to wrap this article up. I hope you have been able to gain something from this installment, it has been a trying period. I learned a couple of new things and hopefully, my mistakes will help someone else. The seedlings are doing very well now and beginning to settle into their new pots and growth is really taking off.

The next time we meet here the plants should be close to, or already in flower. The method of feeding I am using seems to be working, so far. I have been doing a light daily feeding and the coco coir and perlite blend is performing well. As it stands, I will continue with the current plan to run this soilless blend through to the end. I still need to decide the pot size to finish flowering in. I typically use 10 to 25 gallon air-pots, depending on the plant, to allow ample root space, but I don’t intend to grow large plants this run. Seeds and phenotype identification is the goal of this grow. I have to keep reminding myself of this. The grower in me wants to see how big these monsters can get. I just need to stay focused and get these seeds renewed as quickly as possible. There will be plenty of flower to work with for medicating. My small harvest this season produced well over 60 grams of oil so I am good for several batches of canna-cookies.

The seedlings are still small and despite the similarity in leaf structure there appear to be three different sizes of plants. By the time the next article publishes we may be able to see some more significant differences in the plants. You can see a variation here in the photo. The one on the right is more narrow and red-stemmed compared to the thicker, white-veined leaf on the left. The leaf pattern is very similar but there is a distinct difference in thickness.